When Radio New Zealand asked William Ray to make a daily podcast about Covid-19, one of the first questions was how to involve the audience safely with everyone in lockdown.

Community station manager Phil Grey just wanted to keep his station on-air without asking his volunteer programme makers into a studio where they would be at risk.

In late March New Zealand shut down everything except essential services to fight the Covid 19 virus, and everyone confined themselves to their home “bubble.”

New Zealand’s public media funder, NZ On Air, was suddenly and unexpectedly faced with studio closures at the 15 community and Pacific stations it supports nationwide.

With each of them home to a wide range of people from local communities, studio access restrictions meant a sudden drop-off in content.

Grey said much of this was for audiences who most needed timely information in their own languages.

NZ On Air funding adviser Nicole Rex was aware of the VoxPop platform and asked if it could also be made into a remote studio for broadcasters.

“During Covid-19 it has been important to have them continue their broadcasts in a safe way, especially as they could broadcast important health information in many different languages and keep communities connected during lockdown”, she said.

The solution was to create a new platform called “VoxPop Studio”, capable of hosting up to 15 different radio stations.  Radio hosts could use the simple tap interface on an iOS or Android app to record. Another tap sends the recording to a dedicated Content Management System (CMS) where it can be downloaded for editing.

Voice-text transcripts in the CMS make it easy for technicians to identify tracks and instructions and edit them together.

Rex said the platform was tailored to allow for longer recording durations which meant broadcast quality radio shows could be made from the safety and comfort of content makers' homes.

“In these uncertain times this app has allowed our stations to continue broadcasting vital information to their communities,” she said.

In a lockdown scenario, Pacific language translators no longer had to drive long distances to studios to record 30 second messages in production quality.

Grey said the result was effectively a remote production-quality studio which allowed presenters and technicians to put radio shows together while at their respective homes.

“The opportunity to work with VoxPop was eagerly embraced, and we are very pleased with the development done on the app which now means we can encourage effective home recording.”

Ray and his team realised quickly that the existing RNZ VoxPop app would be ideal to pull in studio-quality questions from the public which could be played in a daily podcast, with an expert answering them.

“Short snippets of their highs and lows, encouragement and solidarity. And a few personal dramas.  One man told the story of how his wife gave birth to their child the day after New Zealand went into a full lockdown,” he said.

In the United States, 1A and NPR executive producer Rupert Allman knew he had a big part of the answer already in 1A VoxPop, which allowed the audience to easily contribute their experiences directly to the show in a safe environment.

The NPR syndicated show hosted by Jenn White is based in Washington D.C. at WAMU, and is a star in US public radio. It is heard on over 375 radio stations across America with a weekly audience of more than 4 million.

Involving the audience in the show is integral to 1A, and as the pandemic swept across the US the team used 1A VoxPop to gather stories from Americans on how the disaster was impacting their lives.

Audiences shared intimate details of the loss of loved ones to Covid-19;  how lack of touch had affected them and whether remote learning was working. The responses were woven into the show daily.

Allman said 1A VoxPop represented the cutting edge of how listeners engaged in a national conversation.

“It has become an integral part of our production process for each hour of 1A as it opens a pipeline of high-quality listener voices. It’s a simple concept, that uses clever engineering to fuel critically important conversations,” he said.

New Zealand has led the world in containing Covid-19 and most daily freedoms have returned. But the threat of another Level 4 Lockdown is only literally a sneeze away.

For radio shows, VoxPop Studio provided a solution for stations where studios had to be closed.  It allowed presenters, contributors and audiences to easily submit studio-quality recordings from home to a central point where it could be processed.

VoxPop is not just about being used in a pandemic. Shows such as 1A and Science Friday built strong communities around the VoxPop platform well before the pandemic hit, and this allowed them to solicit compelling and unique stories.

Science Friday has used SciFri VoxPop to regularly engage its audience on another great disaster of our time for example, Climate Change. 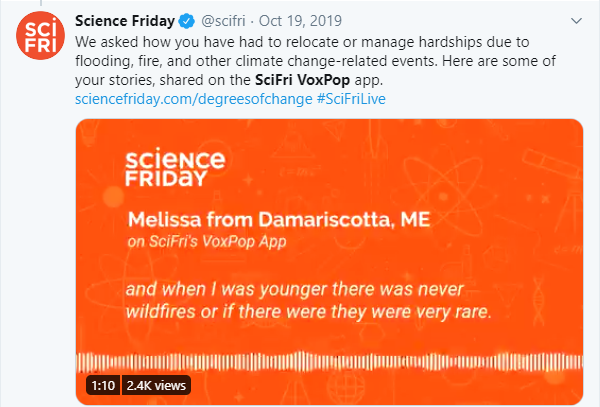 VoxPop can help remove the need for lots of infrastructure to interact with audiences using voice and provides a direct connection to listeners within the show's own brand. But there is still much work to do.

Radio stations worldwide never really contemplated being locked out of studios for months on a mass scale.  For network broadcasters, even after a natural disaster such as an earthquake, another studio in another location could be used for continuity.  Pandemics present a unique new disaster that broadcasters must contend with.

Radio stations worldwide are looking for ways of easily conducting pre-recorded and live two-way interviews with both the interviewer and interviewee in remote locations, which is a problem VoxPop is turning its attention to.

Governments will learn from this pandemic, and next time you are likely to see lockdowns happen a lot faster.  If any good can come from this, it would be that we now have an idea of what is required to pandemic-proof a broadcaster.

We know which tools work and where there have been issues. When things get back to normal, as they eventually will, we must not forget these lessons. We can be more prepared next time.